Yep, that’s right! I have officially declared it and will make the most of it. I feel so motivated this morning, it’s incredible. It all started with getting my eating under control. I’ve been eating clean for 17 days now and I feel better than ever. I still miss my morning coffee, but I now realize it was hindering my water intake as well. I just need to find the balance between the two. Also, this morning, I stepped on the scale and saw that I was below 150lbs (149.8 lbs, barely made it, but still). I cannot remember the last time I was there. Probably after I gave birth to Rina (when I was vegan). That was one early celebration because I weighed myself before heading in for my WOD.

Last night, a fellow Crossfitter posted on Facebook that she had a new DU PR and it inspired me to finally get my act together and work on them consistently. I watched a few Youtube videos and set out to work as part of my warm-up this morning. I managed to string 2 consecutive ones x3. It’s not many, but to me, it’s double what I used to be able to do! 🙂 I was so excited and Tracey witnessed it as well and she was just as excited as I was! Lol! She’s such a good cheerleader!  I tried a few more times and could only manage 2 at a time, but I was pretty stoked with that!

Then, it was time to team up for the WOD. I teamed up with Neil and because there wasn’t enough ergs, we were on the Airdyne. This WOD consisted of many of my nemeses, but I didn’t mind, I like working on my weaknesses. I had to scale down to FG with the following: 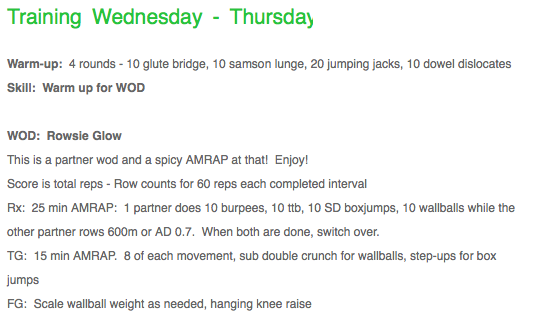 Partner 1 worked on the Airdyne while partner 2 did the other movements. You couldn’t switch until both partners were done. I started on the Airdyne and got going. We finished with a score of 793 (I was responsible for 393 of that) which puts me at 49.5% of the total score for my team. Very close to being equal effort put out by both of us and I’m really happy with that! I never stopped once on the Airdyne and although I didn’t get any rest between the rounds, I just kept moving as much as I could. It was a hard one, but a fun one and I was still beaming from my DUs. That has put me in a really good mood for the day. I hurried over to the grocery store to get what I was missing to make these delicious egg muffins for breakfast. I got everything ready and popped them in the oven while I went to have a shower. They were the perfect celebratory breakfast for today and I got more food prep done since I have to be at work tomorrow. I am now cuddling BeZU on the couch and I have to say, this day is setting out to be a good one!

One thought on “This Will Be My Year”