We had a busy weekend, spent family-style and running around. Saturday, we got up early and did our errands. We had intended to go to the Quadra Village Community Celebrations, but we had so much running around to do that we ended up missing the festivities. That’s ok, we ended up planting our herb garden and I was reminded that gardening, sometimes, feel like a workout:

Burpee… Why you gotta haunt me so?

However, after Friday’s WOD, my sciatic was brutally letting me know that it was angry with me and things didn’t improve much over the weekend. 😦

We went out for breakfast for Mother’s Day. Who am I kidding, we went out for breakfast because it was Sunday! LoL! Afterwards, we decided to bike downtown and Ben hooked up the stroller to his bike. The girls traveled in style with the Jambox speaker in the stroller with them and music playing while poor Ben had to pull them through town. We parked the bikes and stroller while we strolled around. Rina got a blister on her toe from her plastic sandals and took them off. Béatrice didn’t want to be left behind so she copied her big sister. Their feet were filthy when we came back home! I thought the bike ride would help with the sciatic pain, but it didn’t. It didn’t make it worst either. It was just a constant throbbing, burning pain in my left buttock. We came back home to a late lunch and I took the girls to bed with me. Nobody slept, but it was nice to get some cuddles and relaxing time together. Ben also made me a stand for my iPad Mini and, although it wasn’t the costliest of Mother’s Day presents, I was really thankful for it. He had made one for himself a few months ago and I kept borrowing it when he wasn’t using it. Now, I have my very own and don’t have to steal his! 😉

I was excited to see the WOD last night. Funny enough, I had been thinking about Baseline lately because it was my 1st WOD ever and I was curious to see where I stood compared to my humble beginnings. Well, here it goes: 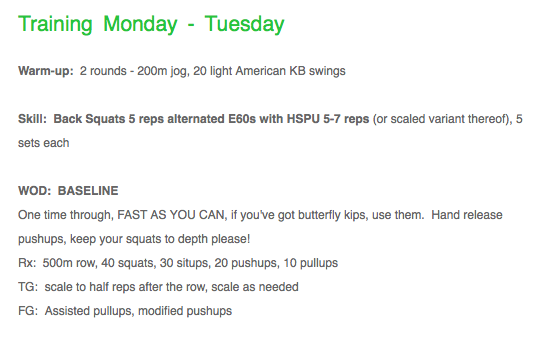 Since I could feel EVERY butt giggle (not in a fun way, but in a “my sciatic is painful” way) on the warm-up run, I decided to avoid the squats today. Coach Caleb suggested I try some deadlifts instead. I chose a low weight to not irritate my sciatic even more, but even at the low 85#, I had to stop on the 3rd round. It was burning and pulling and hurting, so Coach Caleb said to just rest during the squats and keep working on the HSPU. I managed those with 1 yoga block and 3×5# plates. I did them strict and they were hard. During the back squats, I stretched and tried to do some active release in my glutes and hip flexors.

I was ready for this one. Tracey and I paired up in order to score one another. I had a strategy and was ready to tackle it. I really wanted to get the most of my row and I extended back and reached forward as much as I could which resulted in me keeping my average stroke per 500m around the 2:10. Unheard of for me. I went above that towards the end as I fatigued, but I was able to bring it back for the last 50 metres. So far so good.

For the air squats, I wasn’t overly fast, but I only stopped twice if I remember properly and for only a few short seconds.

Then, it was onto the sit-ups. Again, I wasn’t overly fast, but I only took 2 short breaks before completing the 30 reps.I also no-repped myself for a rep because my hands didn’t touch the ground behind me on one rep. I was honest and corrected Tracey on her count! Accountability, people, accountability! If you cheat on a rep, you only cheat yourself! 😉

The push-ups were hard. I had a hard time stringing them along at the beginning, but managed to do 5 in-a-row towards the end. I did them all RX though and didn’t need to drop to my knees. Onto the pull-ups we go!

I had set-up with the red band and only managed a max of 2 in-a-row. They were mostly done singles and I think that’s where I lost most of my time. I never looked at the clock during the WOD (and waste precious seconds turning my head around?!? No siree!, Not me!) and I was expecting to finish around the 8:00 mark. I was incredibly disappointed when Tracey called out 8:37. Yep, even though it was a PR, I was angry. Yes, I had done the push-ups RX and my band for the pull-ups was the smallest I’d ever used for Baseline, but I was still mad that I wasn’t closer to my goal. Below is my progression for my multiple attempts at this WOD (The most recent on top): 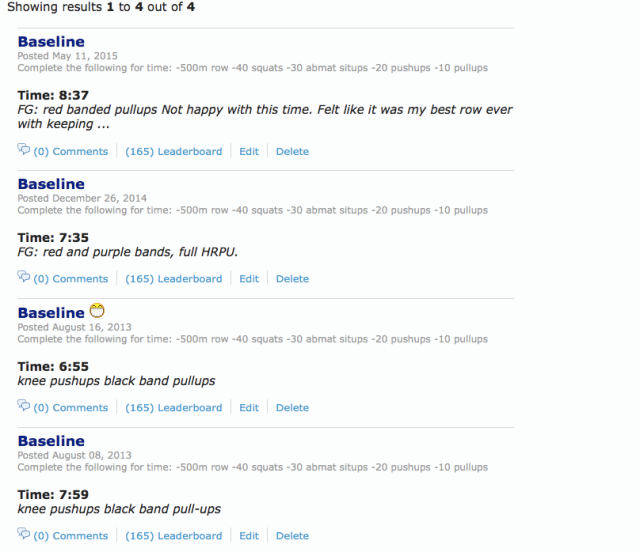 I tried to shake it off, came back home showered and did my hair. I was still upset:

Not a happy camper

Then I thought: You have your lovely cozy yellow hoodie on and your freckles make you look good and you’re wearing funky leggings that show off your hamstrings and quads. Turn that frown upside-down and celebrate the fact that you can pull off wearing a banana-yellow hoodie and rock the rest of your day, even if it’s grey and chilly outside!

Mindset is everything! Focus on the positive, let go of the negative!

I took my own thought to heart and decided that even though I wasn’t close to my goal, my score is still progress and I can only achieve progress with some failures thrown into the mix. Failure is growth and growth is progress!

Now, if I could just get rid of my sciatic pain, life would be just peachy, cuddling on the couch with my little Béa! 🙂