I had plans with Kath to meet up at her Jim’s Gym for a post-marital WOD today (Kath and Jim got hitched earlier this week 😉 ) Unfortunately, I had probably the crappiest sleep in a long while last night. Here’s how it went:

2130: in bed reading. Dozing off about 10 mins later, so I turned down and fell asleep quickly.

0100: wide awake. I read in bed, hoping it would help me fall back asleep.

0300: Finally dozing off, only to be awaken by the smoke detector going off right outside our bedroom. The nice thing is Ben woke up this time around, so I wasn’t alone awake this time.

0330: Just as I was dozing off (again), Béa woke up crying, asking to “rock with mommy”. She was holding on so tight to my neck that I made sure to hug her tight before putting her back into bed

0400: Dozed off, only to be woken up by Ben snoring. I grabbed my pillow, sweater, slippers and eye mask and made my way downstairs. It was cooler down there, so it took me a while to get comfortable (hood on my head, 2 wool blankets, eye mask on) and I was off for some sweet slumbers.

0625: Rina comes downstairs and wakes me up, shortly followed by Béa. They both tried to cuddle with me and I finally gave up on sleep after Béatrice wouldn’t stop digging into my leg with her toes.

I got up, showered and started laundry before we all headed out for breakfast with Grandma who is visiting from Ontario. We got some groceries on the way back and then I got ready to go meet Kathleen at her place.

I had asked Kathleen is we could do the Friday WOD from the Box since it had running in it and I felt like challenging myself. 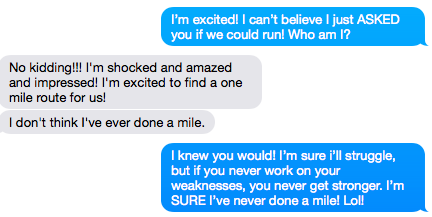 Who is this person ASKING to run???

When I arrived, Kath showed me the few running options we had for the 2nd part of the WOD and I chose the out-and-back with the steep hill at the beginning. We then warmed up for a bit and then moved the barbells in the backyard. I was debating using 55# or 60# for the bar work and I’m glad I settled on the 60# because I felt like I was sandbagging it after 3-4 rounds. I probably should have gone up to 65# or even 70# in order to really get some work done. It was nice to work outside though and we both did our work and chatted in-between sets. Her “garage gym” is pretty impressive and I felt lucky to be able to work out with a good friend on such a hot sunny day. I was slowly dreading the 2nd part of the WOD and was trying to not let my head win over my determination.

We determined a line in the middle of the street as our starting point and Kathleen took off on her gazelle legs. I could see her putting the distance between us, but I wasn’t upset about it. It wasn’t a competition between us two and I was kind of happy to see if I could run my longest distance since starting Crossfit all by myself. Don’t get me wrong, I love when some of my fellow Crossfitters join me on my runs, but today was going to be a true testament as to what I was made of. Just my legs and my head. Who was gonna win?

That hill came about quickly. It was something else though and it felt like it would never end. Looking back on the elevation graph, it was probably more daunting for this crappy runner than it really was:

Yep! Just a small hill after all!

Once I got over the hill, I picked up the pace a little and kept an eye out on the address Kathleen had given me as our turnaround point. I had it written down on my thigh with a dry-erase marker, to make sure I would remember. Kathleen came back and gave me another visual pointer for the turnaround point and kept making her way back to her place. I had yet to reach the turnaround point and although it was really hot, I felt like I could maybe do this. I finally reached the turning point and started making my way back. It felt like more downhill and I was trying to pick-up the pace a little without losing control of my short little legs. Regulating my breath on the faster pace was hard and I managed to get a good rhythm going.

Kathleen was done and she came back to provide encouragement. She told me I was in at 9:15 and urged me to lengthen my stride and pick up the pace. I felt like I had nothing left and said so out loud. Kathleen would have none of this nonsense and urged me to keep going. I chugged along, picked up the pace and crossed the line in the street before putting my hands on my knees and chasing my breath. Kath told me my time: 9:56!

I was so freaking proud of that time! I used to average 13:00/km back in 2011 and now, I had just done a mile (1600m) in 9:54! Don’t get me wrong, there’s no way I could have sustained that pace for very long, but if you compared that when I started Crossfit 2 years ago, I had to sub running for 200m run-walk, I’m pretty happy with where I am today! Not to forget that it was after doing some barbell work!

After I caught my breath, I was overwhelmed with this proud feeling of great accomplishment! We went back inside and Kath lent me some books that I could take with me on our Cuban vacation. I cooled off a bit and came back home to shower and finish up laundry. I fuelled up on a delicious lunch and am now feeling my legs getting slightly heavy. We are all relaxing on the deck and I’m kind of looking forward to bedtime! Tomorrow, we have a little hike planned for early morning! Here’s to a great way to spend the long weekend!