So, I have two kids in school as of today! Rina is in kindergarten full-time and Béatrice has started preschool 2 mornings a week yesterday.

When it was time for us to leave Béatrice in her classroom yesterday, Rina burst into tears. She didn’t want to leave her little sister! That almost broke my heart, but she soon forgot about her heartache once I took her to the playground! 😉

These are the best pictures I could take of Béatrice on her first day of pre-school! Typical Béa!

This morning, we had to wake up much earlier than our usual. Rina was starting school and the bus comes by really early to pick her up.

Rina is now in kindergarten!

She did really well getting on the bus, sat next to another little girl and forgot all about us! She’s so freakin’ independent that one!

With her starting school early, that also means that I won’t be able to go to the 0600 WOD anymore because Ben isn’t an early riser and I need to pitch in to get the girls ready to go in time when I’m not at work. I’m hoping to still be able to go to the Olympic lifting class at 0600 though, but I’ll have to negotiate that with my other half! We do things very give and take and since he’s not an early riser, I’ll pitch in A LOT when I’m not working. When I’m at work, he’ll have to do it all by himself, so I feel it’s only fair! Parenting is a 2-person job in this household!

After we dropped her off on the bus, I went to get some groceries, came back home and rested a bit before I headed out for the 0930 WOD. I was not excited because to me, it’s a new class, which means, new people who I don’t know and also, the WOD was crazy. I looked at it last night and thought: “I may need 45-60 mins to finish this one.” And there you have it: my goal was to finish sub 45:00!

We all got ready outside and we took off for the 1st mile (1600m, broken into 4x400m out and back). That was brutal, but I managed to do it without rest. Of course, everybody was done before me, but I didn’t care!

I was really hoping to do my pull-ups strict with the blue and purple bands, but even in the warm-up to the WOD, I knew I would struggle. On my 1st round of pull-ups, I asked advice from Coach France as to how to exactly DO a strict pull-up! I have never been really good at doing them and she told me I was kipping them. I paused at the bottom to really stop the swing and plowed through doing that for the rest of the reps. I broke up the pull-ups into sets of 3, the push-ups, I did Rx and broke them up into sets of 5.

Then, I was onto the 100 lunges that I broke into sets of 10. I was much more effective at doing them almost without pause and they were the easy part of this WOD for me.

Back to the push-ups (again, broken into sets of 5 mostly and Rx) and banded pull-ups. I was the last one out on the mile run and I took a lot of little walking breaks. I really was trying to not walk, but my legs were toast! I kept pushing and finished my 3rd and did all of my 4th running round by myself. I tried to pick up the pace on the 4th round and came back inside with a time of 42:19. Goal crushed!I was done though! That was a tough one! 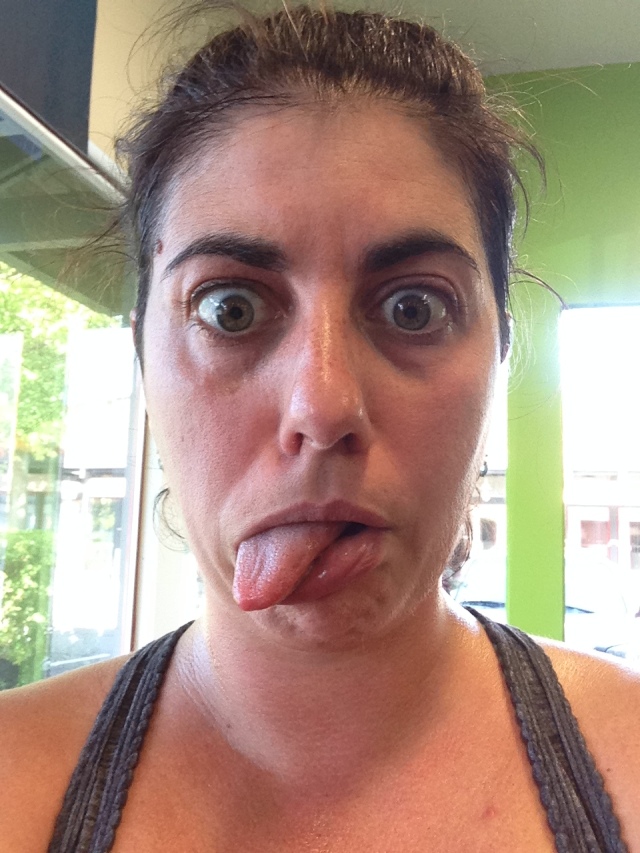 I rushed home to shower quickly before Ben left for work and I’m now waiting for Rina to come back home from school. I can’t wait to hear how her first morning went! Now, I just need to figure out when I’ll have time to do all my cleaning since I was out for most of the morning and I need to nap before tonight’s night shift!